You are here:
Gwinnett News 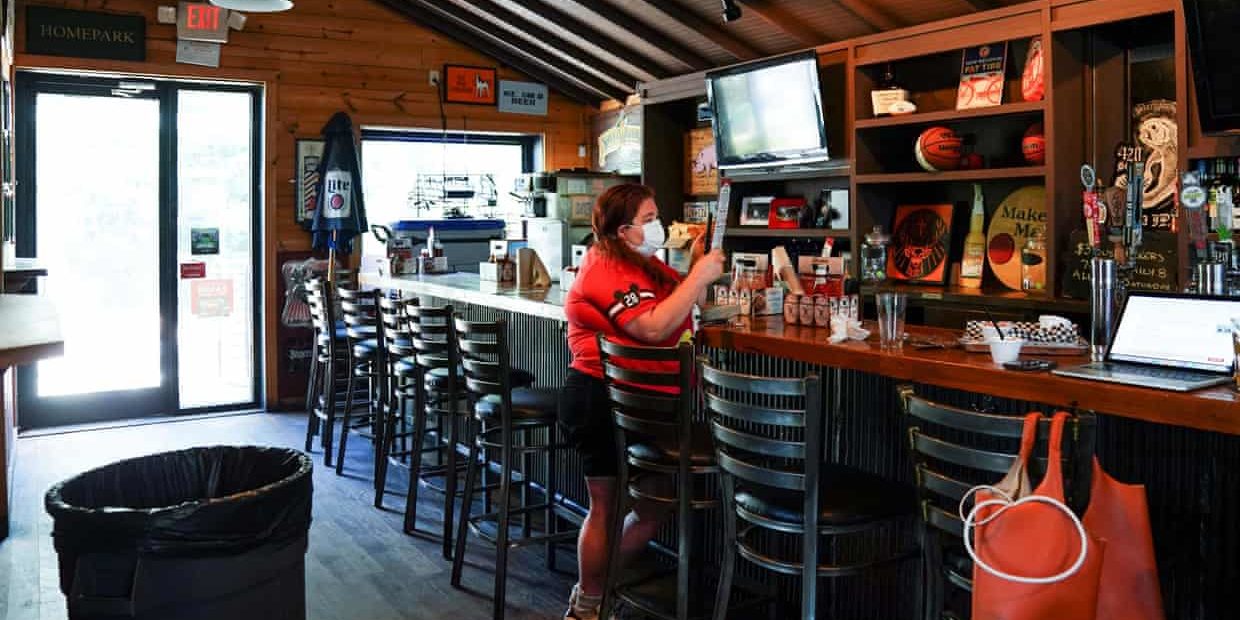 The health risks of an early reopening could be even more risky than an economic one, economists say

When John Gianoulidis, owner of the Kafenio Greek Diner, heard the Georgia governor, Brian Kemp, announce restaurants could offer dine-in services once again this week, he feared the worst for his restaurant and coffee shop in Atlanta.

“Kemp mandates restaurants reopen, whether I reopen dining rooms or not. I file for business interruption insurance, it does not go through since I am ‘allowed’ to operate full capacity,” he hypothesized, adding further down in the now viral post, “If things blow up again, they are still on my tab not on the states, since they are no longer employed. Guys, this is about screwing the working class and small business, not about helping us.”

Economists are uncertain if Gianoulidis is entirely correct about the exact rationale behind the sudden announcement to reopen Georgia as coronavirus cases continue to rise, with nearly 25,000 confirmed in the state as of Tuesday afternoon. The state’s reopening has been so early that even Donald Trump urged Kemp not to do it.Advertisement

But they can agree the most in danger from Kemp’s actions – both economically and healthwise – are those who open their businesses or return to work in Georgia’s new sudden easing of restrictions.

The state’s current count of positive virus cases makes it the tenth highest in the country as employees were cleared to serve meals in a restaurant, offer up tattoos or provide hair and nails services and check-in gym goers for Zumba class. In the last month, Georgia’s department of labor processed 1,090,536 claims, more than the last three previous years combined. Nearly a third of the claims came from the food and accommodation industry, many of whom can now – technically – go back to work as restaurants open.

While that may help ease the burden of claims processed by the state, how it affects the greater economy is unclear, said Elise Gould of the Economic Policy Initiative.

“From an economic standpoint, it’s just not really clear why you open up one set of businesses, versus another set,” she said, referring to Kemp allowing non-essential business to reopen.

Coronavirus: the week explained – sign up for our email newsletter

Kemp’s office did not respond to the Guardian’s request for comment. The state’s department of labor did not have much concrete guidance as to whether the reopening would see jobless claims shifted off the government books.

“This is a way for them to continue to receive some of those same benefits as they gradually come back to work. And then when it’s time to get back to work that employer stops filing for them,” the Georgia department of labor communications director, Kersha Cartwright, said.

But it’s unclear when that line between gradual and full time was drawn and by whom it was to be decided – the state or the employer.

Many business owners, like Gianoulidis, will continue to offer carry-out options, but want to wait to hear the risks versus rewards from health officials before opening and seating customers in close quarters, they say.

“I’m just trying to figure out what’s going on. I haven’t heard from the US health department,” Gianoulidis said, adding he would rather hear from health officials than politicians.

But for those businesses that do open up, while the state continues to follow through on its shelter-in-place order until 30 April , this could leave vulnerable employees on even more uncertain grounds, said Gould. Some might not want to go back to work, feeling unsafe while others may be living with elderly family members or those with pre-existing conditions.

Others may return to work, uncertain about the state’s policy on unemployment insurance, Gould added, unsure if they would still qualify now that their place of employment is open.

When asked what would happen if employees of non-essential businesses that could reopen under the state’s mandate chose not to return in fear of their safety, Georgia’s department of labor could not clarify if they would still be eligible to file for unemployment.

“Work with your employer, try to work something out. If you cannot work it out and you decide to separate yourself from that place of employment then we will base our eligibility upon the facts presented in the case,” Cartwright said.

Georgia’s governor might not have felt the pressure to rush his state’s residents back to work if he had more financial support to fill in gaps where the Cares Act did not reach, an April report from American Progress said.

But the health risks of an early reopening could be even more risky than an economic one.

According to a new analysis of data released by the Daily Beast in collaboration with MIT and Harvard Universities, that could most likely be the case. If the state had continued its current stay-at-home mandate and kept non-essential businesses closed, coronavirus fatalities by mid-June would have been somewhere between 1,004 and 2,922. Instead, the team’s simulation suggests that number could now be as high as 9,748.

“This is a policy that has not been endorsed by experts in public health … one concern going forward is whether it would lead to new outbreaks and contribute to a second wave of growth of the pandemic,” Cornell University labor economics professor Francine Blau said.

For now, Gianoulidis will keep his dining areas closed, like many other restaurants in Atlanta, with too many financial and health risks at play for him to open them with confidence.

“I’m just going to continue doing what I’m doing until we get a better idea of what’s going on,” he said.

Gwinnett and coronavirus: A guide to county and city service delivery
March 31, 2020